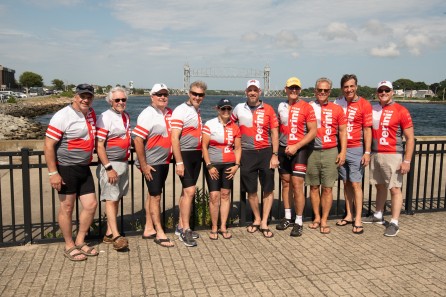 It was 3:20 AM. Ahhhh… I had an hour left, but I couldn’t risk oversleeping. After some futile mental tug of war, I got up at 4:15 and jumped in the shower, fidgeted with the hotel coffee maker, and went through all the other prerequisite motions before we hopped in the car at 4:45. Linda “Need for Speed” Angier was at the wheel, so thank God all the cops were still in bed. And yet somehow, we still almost missed the start of the race. This all was no different from how PMC race day usually starts for me, but this year was different: I had just recovered from a brutal 7-week bout with pneumonia, and I wouldn’t be riding.

We arrived right on time and like clockwork, bicycles came pouring out of the parking lot. I yelled “thank you, thank you, thank you” as they pelted by, and occasionally threw in “you’re almost there!!” – only 109.9 miles to go. I was there to encourage many good friends, especially my dear friend Pete on his 26th ride (I am still a neophyte at 14), and also because I could never even consider being anywhere else. But deep down I was so jealous, I hate to say, even to the point of anger – I should have been part of the pack. I had done all the preparation, raised the support and worked as hard as we all do every year, only to have it all wasted on a bad turn of fate.

After kickoff faded to silence, we went to a little country breakfast place nearby. One of the employees outside greeted us by yelling “He ain’t here yet!” – apparently the owner was stuck in race-day traffic and he was the only one with a key, so breakfast was not served. So we pulled out and headed to Dunkin’ Donuts, where my breakfast sandwich order was forgotten and then took 40 more minutes to make. They gave me a free sack of fried spuds to make up for the wait, and probably also my grumpiness. Screw the sandwich – all I was thinking was, I should be out there riding right now. We left with hours to kill for the drive down to Bourne and headed to the nearest bar to wait. Two beers in, and I’d never felt more “off-track” and left out in my life.

Fast forward to the 2:30pm finish line, where cheers, hugs and exhausted tears all culminated into celebration and team photoshoots at the Maritime Academy. In addition to sponsoring 3 kids who have cancer, Pete and I ride for the same team, Perini. This year, we took a second team photo including me, one of the PMC’S “Living Proof” –  what they call the riders who have survived cancer.  And as I stood there smiling, I finally got over myself and remembered what it’s really all about: the fight to beat the odds, and holding onto how glorious and miraculous it feels to be here, standing on the other side of a vicious battle against your body and soul. That’s what powers so many people to follow through with this and make it an immense success every year. Part of the energy is the athletic experience of the ride and the endorphins that kick in, but that’s nothing compared to the powerful, palpable high of unity, of thousands of people coming together at once to sweat for one cause.

Even when I’m on my Peloton (for now), I can feel the rush, the excitement, and the meaning of that rubber on the road. It pushes me upright on the saddle, and I bang out the miles beyond my selfish limits every time.  It’s an honor to make the trip for all those, known and unknown, who are struggling to remain with us. So still, I ride, and ride, and ride, in hopes that someone will benefit from all of our work, just as I have.

Congratulations to all my fellow riders – the rest is beyond words.